One of Newcastle’s defining qualities is the unique townscape created by its Georgian and Neoclassical sandstone architecture. Geordies take great pride in this architectural heritage and it’s no surprise that Grey Street—one of the paragons of sandstone—was voted Britain’s ‘Best Street’ by the BBC a few years ago. But for decades there was a clash between this aspect of Newcastle city life and another of our defining characters—heavy industry.

A century of heavy industrial activity in and around the centre of Newcastle has no doubt had a significant impact on the local environment, and one of the most visible manifestations of this was that years of sooty deposits from the city’s many industrial chimneys had collected on the sandstone buildings.

By the 1950s this had become an issue for locals, leading the council to embark on a clean-up programme to restore the hundreds of city centre buildings affected back to their former majesty. A process of cleaning began and throughout the 1960s and 70s buildings all over the city—including Grey Street and Central Station—were thoroughly scrubbed down. Below, for example, you can see numbers 2-12 Grey Street prior to cleaning and after.

Type : Photograph Medium : Print-colour Description : A view of Grey Street Newcastle upon Tyne taken in 1989. The photograph shows the former ‘Amigos’ restaurant on the corner of Grey Street and Mosley Street. The building is now empty and derelict. Collection : Local Studies Printed Copy : If you would like a printed copy of this image please contact Newcastle Libraries http://www.newcastle.gov.uk/tlt quoting Accession Number : 053720

Unfortunately, the majority of the photographs from the days of sooty buildings were in black-and-white, making it difficult to appreciate the state some of them were in. To truly appreciate just how black Newcastle’s buildings were, your best bet is to look at one of three buildings which managed to escape the clean-up and is still standing covered in soot to this day—the Church of St Thomas the Martyr in Haymarket, Claremont Buildings on Newcastle University’s campus and Pape’s Building opposite Central Station. 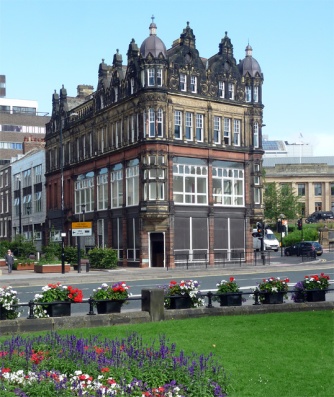 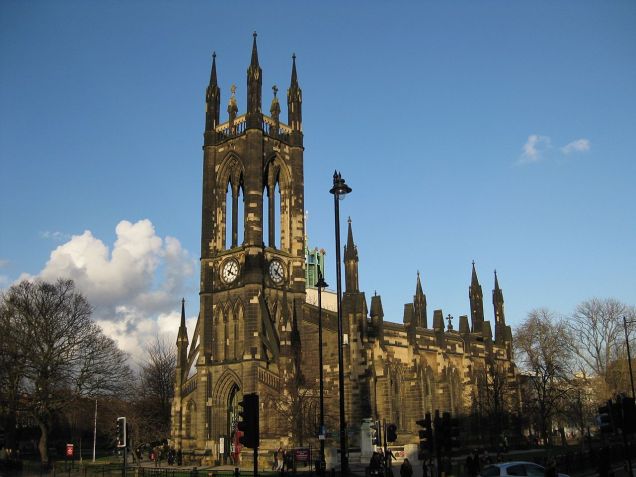 This entry was posted in research and tagged newcastle. Bookmark the permalink.