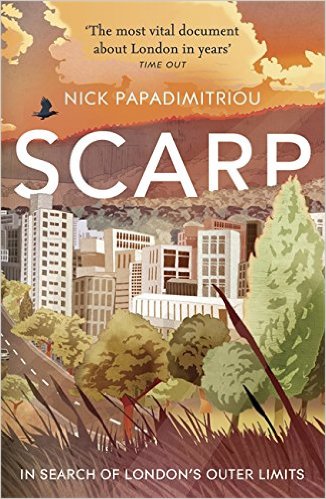 Topography melts into biography in Nick Papadimitriou’s Scarp. Landscape immersion becomes Papadimitriou’s analgesic for alienation from society as he is guided by a brew of scattered concepts—some grounded in the international avant-garde of the 20th century, others borrowed from obscure denominations of Christianity and Indian philosophy.

The book is ostensibly the distillation of thirty walks Papadimitriou undertook in 2011 around Scarp, an amorphous area covering much of the former County of Middlesex. Early on we’re warned that Scarp ‘is neither a detailed geographical and historical survey, nor a wholesome itinerary of “fine” places within easy reach of the metropolis written for the benefit of the casual walker’. True to his word, what follows is a haze of memory, polemic, psychogeography and transcendence. Pulled together this unusual blend forms what Papadimitriou calls deep topography.

Nick Papadimitriou speaking in The London Perambulator (2009) about the concept of deep topography.

In the course of his journey through Scarp, Papadimitriou encounters Celtic ‘thin places’—‘where a sense of something other lurks just behind the visible’. Engaging with thin places disconnects Papadimitriou from the present, allowing him live through the lives of those who were there before him. As he drifts through time and space Papadimitriou becomes a suicidal hippy runaway, a serial killer who lived for 300 years and his younger self, locked up in the 1970s for a string of arsons. Through the yogic concept of prakrti-laya—or ‘absorption into nature’—Nick becomes one with the landscape, allowing Middlesex to flow through him.

Fantastical as it can be, this is essentially a work of topographical writing, through derelict brownfields, beaten canal paths and sewer farms in a changing London. Scarp, along with Papadimitriou’s elucidation of the concept of deep topography, is a seminal contribution to the field of psychogeography (a term Papadimitriou disavows).

I highly recommend watching John Rogers’s The London Perambulator before reading this book. Scarp’s impact is going to be strongest for those with a grounding in the epistemological development of psychogeography as a form of subversion and artistic method, especially those scornful towards the sanitised academic strain whose output is confined to over-priced and under-read academic monographs where re-hashing of theory rules supreme and praxis is scant.

As a side note, it’s an absolute wonder that this book was published by a mainstream publisher. Credit to commissioning editor!

This entry was posted in books, psychogeography. Bookmark the permalink.